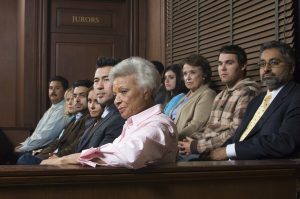 This is the fourth post in my series on defending against domestic violence charges in Tampa Florida. My last article discussed the process that occurs after an arrest for domestic violence. I also provided information on when a dismissal of the charges may be sought after. In this article I will discuss what to expect at trial in a domestic violence case. Contact my office today to speak with an attorney if you have been arrested.

Florida grants the right to a jury trial to those charged with all violations, misdemeanors, and felonies. This means that a defendant facing domestic violence charges has the right to have his or her case heard before a jury or solely by the Judge, in what is referred to as a bench trial. If the accused has decided to invoke his or her right to a jury trial, then the case will begin with the jury selection process. Jurors are selected from a pool formed by members or citizens of the community. The attorneys for the defense and the prosecution will pose questions to the potential jurors through a process called voir dire. In some cases, the Judge may also ask the jurors specific questions. The purpose of this questioning is to identify any possible biases among the jurors and educate them on the law as it will apply to the case at hand. These questions are often helpful as they allow both parties the opportunity to remove members from the pool that could cause an unfair trial.

When a potential juror’s response indicates probable bias, this individual can be removed for cause, either by the Judge or on Motion from one of the attorneys. Any juror that displays such behavior may possibly be removed from the pool for cause. Further, each side is also given a specific number of peremptory challenges. A peremptory challenge allows counsel to remove a juror for any reason. However, these challenges cannot be used to remove jurors based on their gender, religion, race, ethnicity, or for some other protected reason. The jury will be empaneled once the selection process is complete.

The lawyers for each side will begin the trial with an opening statement. The prosecution will be the first to make such a statement. The prosecution, which has the burden of proving the charges beyond a reasonable doubt, will also present their witnesses and introduce evidence first as well. The defense is then given the opportunity to cross-examine those witnesses and put on their own case-in-chief to defend against the charges. Sometimes, if the prosecution fails to meet their burden, it may not even be necessary for the defense to call additional witnesses. This is a tactic that is often used to prevent a defendant from divulging any incriminating information.

The jurors will then deliberate and return a verdict of either “guilty” or “not guilty.” In some cases, the jury cannot come to a unanimous decision and the Judge may order a mistrial. However, in most cases, after the verdict is read, the accused will either be released or sentenced at a later date.

One point that I cannot stress enough is that trial is a long, complicated process. It is crucial that you retain counsel immediately as the possibility of attending trial in a domestic violence matter does exist. There are various rules and procedures that must be followed in Court and a knowledgeable attorney is needed to assist you in navigating this process.

If you have been charged with domestic violence, contact my office today for an initial consultation.