The Burden Of Proof In Criminal Matters 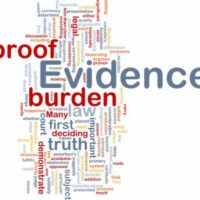 In the United States, criminal defendants are always innocent until proven guilty. However, the amount of proof needed varies in different cases. There are also different burdens of proof at different points of a criminal trial. The stakes are always high in these situations. A criminal conviction or a proven probation violation has significant direct and collateral consequences.

Largely because of this risk, attorneys resolve most criminal matters out of court. These settlements usually feature reduced charges and/or a reduced sentence.

All federal cases, and many state felonies, begin with grand jury indictments. Most state felonies and all state misdemeanors begin with the information, which is a formal statement of criminal charges. At that point, a criminal judge takes over the case and decides whether the state meets the burden of proof at different points in the process.

Officers must have reasonable suspicion to detain motorists or stop pedestrians on the street. This standard of proof basically means an evidence-based hunch that the defendant did something wrong. That transgression need not have anything to do with the charged offense. Most DUIs begin with traffic stops for infractions like displaying an expired sticker or speeding.

Because the standard of proof is so low, it’s very difficult to invalidate police stops. The way the law is slanted, officers basically just need a reason which is better than “s/he didn’t look right.”

At this point, a Tampa criminal defense attorney has a better chance of invalidating police action. The standard of proof, probable cause, is almost as high as beyond a reasonable doubt.

Once again, let’s look at a DUI stop. Generally, officers can only arrest suspects if they do poorly on the FSTs (Field Sobriety Tests), such as the one-leg stand. Many of these tests have very shaky scientific foundations. Furthermore, the test results are often questionable, unless they occurred in controlled laboratory conditions.

Here in Florida, officers must also have probable cause before they can demand breath or blood samples.

At this point, the burden of proof is beyond a reasonable doubt. That’s the highest standard of evidence in the United States.

The exact definition of this phrase varies in different jurisdictions. Some courts use long, convoluted definitions which no one, not even the judge, really understands. Other courts define “beyond a reasonable doubt” as “a doubt based on reason or common sense.” That’s a bit like saying a grey horse is a horse that is grey.

Overall, prosecutors must convince jurors that their version of the facts is the only possible version. Once again, a DUI is a good example. Jurors must firmly believe that the defendant, and not another person in the car, was driving at the time.

Almost all first-time DUI offenders, and many second or even third-time offenders, receive probation. During this period of court supervision, they must often comply with a number of conditions, such as abstaining from alcohol.

If the state tries to revoke the defendant’s probation and send the defendant to jail, it must only prove a violation by a preponderance of the evidence (more likely than not). So, if a defendant comes to a court-ordered meeting with bloodshot eyes, that evidence could be enough to prove alcohol consumption, even though other things could cause bloodshot eyes.

Reach Out to a Savvy Attorney

There are different burdens of proof at different points in criminal cases. For a free consultation with an experienced Tampa criminal defense lawyer, contact the OA Law Firm. Convenient payment plans are available.

By OA Law Firm | Posted on May 10, 2021
« When Can Officers Pull Me Over For DUI?
What You Should Know About DUI Hardship Drivers’ Licenses In Florida »