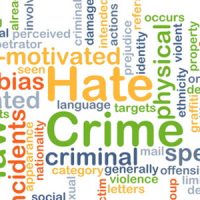 A 29-year-old man faces up to ten years in prison after a jury concluded that a 2021 road rage incident was racially motivated.

Assistant Attorney General Kristen Clarke of the Justice Department’s Civil Rights Division said the verdict “should send a strong message” about the government’s commitment to prosecuting “those who would use violence to enforce heinous racist beliefs.”

Like similar laws in other jurisdictions, Section 775.085 is not a standalone law, but rather an enhancement provision. Additionally, “hate” is not an element of the hate crimes law in Florida.

In Florida, “sexual orientation” usually doesn’t include gender identification. “Advanced age” is over 65 and “homeless” means a person who doesn’t have a private place to sleep on a regular basis, or s/he sleeps in a “public or private place not designed for, or ordinarily used as, a regular sleeping accommodation for human beings.”

Additionally, the enhancement applies if “the defendant perceived, knew, or had reasonable grounds to know or perceive that the victim was within the class delineated in this section.” If scammers target old people because they believe such individuals are easier to fool, these scammers are technically committing hate crimes. The same thing could apply if a burglar targets Asian houses because he believes these individuals have high incomes.

Self-Defense in the Sunshine State

Florida’s self-defense law is quite complex. But it boils down pretty easily. Basically, people act in self-defense if they use a proportionate amount of force to counter a threat to themselves, their property, or third persons.

The Sunshine State has a stand-your-ground law. This law simply means that defendants don’t have a duty to retreat before they use deadly force.

In this particular case, had put the defendant in a chokehold before the defendant advanced on the alleged victim, self-defense would be difficult to prove. Physical force isn’t a proportionate response to racial slurs and taunts, no matter how bad they are.

To determine if this alleged victim’s response was proportionate, the jury would have to look at a number of factors, such as the size difference between the two individuals, whether the defendant was under the influence of a substance (people who are drunk or high do crazy things), and the degree of the threat.

Since self-defense is an affirmative defense, a Tampa criminal defense lawyer must prove each element of the defense, usually by a preponderance of the evidence (more likely than not).

By OA Law Firm | Posted on November 1, 2022
« Seven Common Kinds Of White Collar Criminal Cases In Hillsborough County
What Are The Three Types Of Plea Bargains In Juvenile Cases? »